Harbin: A History and a Reflection 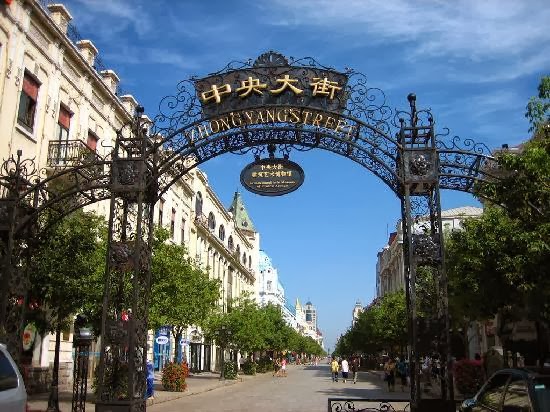 Harbin is cold. Mind-blowingly, thigh-freezingly, toe-numbingly cold. Relatively near the Russian border -- wild Russia, not the European side -- Harbin was, for a while, actually part of Russia, and has the architecture to prove it. People come to Harbin in the winter not for its winning climate, but for its renowned ice festival. Located in three separate areas of the city, the Ice Festival is a massive tribute to ice art and certainly celebrates something this region has in abundance. By day, the sculptures are impressive -- clear and smooth, like thick, weeping glass -- but by night they transform into a neon Narnia. Lights that I think China borrowed from one of the last parties of the 1990s and never returned illuminate the structures and, in some cases, are actually embedded within the ice itself.

The Russian influence in China came with the emergence of the China Far-East Railway, which was an extension of the Trans Siberian Railway. By 1913, the census showed that the roughly 70,000 citizens came from 53 different nationalities and spoke 45 different languages. History enthusiasts among my readers will feel their ears perk up when hearing about Russia and 1913. What happened? What happened? Anyone? Bueller? The Russian Revolution and World War I, correct. Following the relatively tame Revolution of 1909, the 1917 Revolutions - there were two, one in February and one in October - toppled the Russian monarchy and brought the country under the once-exiled Lenin. And the rest is Soviet history. But, during this time, as many as 200,000 "white émigrés" or first-wave immigrants fled into Harbin.

However, in 1935, things got wonky again, when the Soviet Union sold its shares of the China Far-East Railway to Japan, who had occupied Manchuria and redubbed it "Manchukuo." The Japanese takeover received mixed reviews from Harbin's Russian population. Some sided with the Chinese to the extent that they wanted the Japanese out, while others believed that the Japanese occupation could help them deal with Soviet oppression as well as the growing opposition among Chinese who were scrabbling to regain sovereignty. Many Russians left Harbin in 1935, were captured upon entering Russia, and were killed in the Great Purge, accused of being spies.

Many of those who didn't leave stayed and formed the Russian Fascist Party, a party vehemently opposed to Communism and Jews. They harassed the Jews so much that the majority of Harbin's Russian Jewish population was forced to flee the area. In the interim, the Japanese had formed their own little puppet government for their pseudo-state of Manchukuo, and Harbin's remaining Russians had two options: return to the Soviet Union or remain stateless and under Japanese control.

While many of Harbin's Russians are long gone, their presence remains. It lies in the architecture, the shops that sell Russian nesting dolls, flasks that read "Russia" in large, imposing letters, and the blueberries. China is not a country for blueberries. I don't know why they're aren't grown here, but in Harbin, there's blueberry jams, blueberry candies, and sweet blueberry wine.

I'll admit that we didn't venture into the "Chinese" part of Harbin. We were very content to lose ourselves in the European architecture, the coffee, and the relative cleanliness and quiet of the pedestrian street, whose length we must have walked five or six times.

Harbin is still China, though, and at 6:00 p.m. you can walk outside and be covered in an industrial haze. When you breathe in, you wonder if it hurts because of the cold or because of the air quality. You'll wonder why the authorities have allowed every single gift shop to sell fur and stoles. But mostly you'll wonder why you can't just buy a carton of blueberries.
Posted by Hillary at 5:02 AM No comments: In a surprising turn of events, modern history's most desired and accomplished woman has made her
debut on the cover of the Sports Illustrated Swimsuit Edition. A teacher/yogi/astronaut/cowgirl/business woman/doctor/CEO/president, complete with a 39 - 21 - 33 frame, Barbie has been plaguing (or inspiring, if you're an optimist) young girls for decades.

Her maker, Mattel, paid Sports Illustrated to feature Barbie on their cover because, according to Mattel, Barbie, along with legends like Tyra Banks, Heidi Klum, and Christie Brinkley, is a role model who should be proud of everything she's accomplished and should be, to use the edition's hashtag, unapologetic. Mattel goes on to say that Barbie is "under constant criticism for how she looks" so her cover feature is well-deserved for the 54 years of body shaming that Barbie has endured.

What with the who now? Yes, it is true that Barbie's body has come under attack because of its sheer lack of reality and the correlation between lower self-image and playing with the anatomically disproportionate doll. But this play, this idea that we're going to take Barbie's "adversity" and turn it into a positive - the same as Tyra Banks endorsed Special K's doing with lack of diet language in their still obviously weight loss endorsing Special K challenge - is manipulating the idea of body and size acceptance. Yes, body and size acceptance is about acceping all bodies, which I suppose would include Barbie's, and working to project images of untraditional beauty in the media, which would certainly not include Barbie. It's also about acknowledging thin privilege and challenging the message that has long been perpetuated: that girls should look like Barbie.

Moreover, it is, in my humble opinion, a giant step backwards to replace living, breathing women - however steeped in health and beauty tropes they are - with an inanimate piece of plastic. Because that's what Barbie is. All we are is dust in the wind, and all Barbie is is a lump of rubbery plastic. Despite whatever human qualities Mattel may assign her, Barbie has never actually worked as a doctor/astronaut/veterinarian/teacher, as is apparent by her grossly negligent career habits, nor has she felt the lasting sting of body shaming in her solid plastic heart facsimile, and any words said about her and her body - positive or negative- fall deaf on her tiny plastic ears. What kind of message are we sending that this plastic doll can buy her way onto a cover an elite, objectifying magazine that most actual women could never even dream of modeling for? I'll tell you what message I hear loud and clear: If you're rich and thin, you can do whatever the hell you want.

In case this wasn't slap-your-face-with-a-stupid-fish obvious to you, this flies in the face of Mattel's size acceptance facade, as does the fact that the magazine they're paying to feature Barbie is Sports Illustrated, for an edition that profits heavily from featuring scantily clad, stereotypically beautiful women while simultaneously shoving down our throats loaded messages about health and beauty. You'll note that Mattel isn't trying to get Barbie a cover on Bitch or Ms. Next thing you know, though, they'll want her to be in Good Housekeeping because of how she flawlessly decorated her dream home without the use of opposable thumbs.

How is it that, in 2014 Barbie is still a role model? More importantly, how is possible that a plastic friggin doll continues to wield such power and influence? This is scarier than all the Chucky movies combined.
Posted by Hillary at 4:16 AM 1 comment: