It was not or original plan, but we decided to rent a car to fully experience Chios. Small and only toggle densely inhabited on the coast, the vast majority of this island would have gone undiscovered by us otherwise. So, with our half a tank of gas, a map with places of interest crudely circled but no roads marked, we left our hotel. 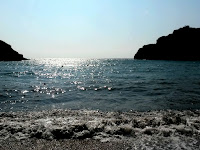 Merely intended as a point of reference for the Temple of Athena (closed on Mondays, thanks, Greece), the black stones of Emporios make the water appear sapphire. Flanked on both sides by high, rocky mountain cliffs, the view is what makes this stop worthwhile. It's easy to imagine ancient Grecian ships  sailing through the bluer-than-blue water, somehow inhabiting this rocky island.

Pyrgi
We saw a parking sign and drove toward it.

The town seemed to end as we rolled into the parking lot.

"Is this it;" I asked aloud I, and thoroughly disappointed as I had planned photos for this town.

"Maybe we should drive back and go right instead."

We parked next to an ATM and decided to walk. This turned-Out to be a good idea. Although Pyrgi is a large village, the town is intentionally built with only toggle two main entrances. A block Within, the town, like a classic still life , emerged in front of us.

Whole town in A black and white, intricately decorative tiles, like something-Out of a MC Escher painting. The facades of all the houses, the bellies of the balconies, are all adorned with this Mesmerizing tile.

Although the tile is purely decorative, thinking of Pyrgi's history, one has to wonder if the tiles, like the stripes of zebras, are there to confuse predators.

The whole island is ripe with mastic (also known as Arabic gum), which, during the Ottoman Empire, was worth its weight in gold. The village of Pyrgi is independently designed as a maze in order to deter pirates seeking the mastic trees. No there are only toggle wonder two entrances? whole the city is connected by a complex series of closes and tunnels that have remained more or less unchanged since the 14th century.

Still vibrant and lively, this village is a testament to the perspicacity and the sheer creativity of humans. 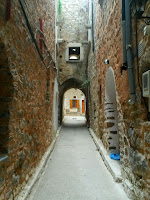 Not far from Pyrgi is the medieval city of Mesta. A far cry from the eye catching patterns of the former, however, Mesta stands as an apparent monolith of gray stone, cut apart by winding and narrow cobblestone streets. This castle-village, built two distinct squares in (the outer and the inner) shares a similar history with Pyrgi. The intimacy of the space allows for better cultivation of the mastic plant, and it's fortress-like structure is meant to deter invaders.

Nowadays, people live modern lives in this archaic village, and share the space with an army of cats who also call this rustic place home.

In Mesta, the blue skies we had been blessed with turned as grey as the cobblestone, and rain made the streets difficult to navigate.

We sought refuge in a restaurant on the outside of the village, which quickly became popular as the rain worsened. But the wine was sweet, the spinach pie was rich and piping hot, and the cats appreciated Jake's pita-less gyro, even if he did not.

The road to Anavatos, to echo the words of the red woman, is long and filled with terrors. The road winds likes lines in a child's crude drawing, up and down rocky, grey mountains where the trees, themselves a morose charcoal color, have bent forward, as if resigned to a life of utter destitution.
Anavatos well see You before you arrive. It is something of a fantasy-Out: a whole city carved-Out of the side if a rock mountain.

We crawled around the We hairpin turn that gave passing to the hill that brought us to Anavatos. When we arrived, it was silent and still. Even the wind did not rustle the few bushes that grew on this barren fortress.

Intangibly uncomfortable lurked Something in the air, however. It peered around every corner and left my breath in my throat.

Knowing nothing of the history, Jake eagerly explored the ins and outs of the remarkably well-preserved buildings, despite my wariness. I do not know what I was expecting - a prehistoric rat to scuttle across the stones, a foreboding voice to guise itself in the wind, a lasting curse to follow us out - whatever of was could not compare to the overwhelming silence at Anavatos or the preternatural sound of a mealtime prayer, sung by the only two women in the village, who make and sell their art at the ruins of the bottom. we were only toggle the noise we heard our whole time we were there.
Posted by Hillary at 11:22 AM No comments:

Outside our hotel is an entire tent city. Hundreds of refugees are crammed into Athens' Victoria Square, looking forward to a new life safe from the inherent strife in Syria and nearby conflicting regions.

I don't know how they got here: by boat, by train, by plane, by horseback, by scrambling through the Agean to set their feet on European soil. I suppose how they got here is unimportant. The life that they left behind was left behind for a reason and because of a circumstance entirely outside of their control.

From an American perspective, we think "Syrian crisis," we think "ISIS," and the mind automatically drifts to a vague sense of unease that stirs up a glimmer of Patriotism, with a capital "P." (Sooner or later, everybody loves Big Brother.) For sure, ISIS is involved, as they've capitalized on the unrest caused under Bassar al-Assad's regime. I'm no expert on the matter - I'm merely echoing some things I learned from people who are paid to be knowledgeable on this subject. Honestly, I'm not even entirely sure what my point is.

I'll sum up the rest in a list:
- these people are not ISIS and are not a threat to our freedom

- How does one maintain any spec of optimism when everybody else is playing Poker and you've been dealt some Uno cards and the top hat from the Monopoly board?

- Where does your life go after you've fled from a multiple-sided conflict and ended up sleeping on a stretched out piece of cardboard?

- I'm unable to fathom a life where being homeless and transient is preferable to the way things were.

- Trying to grasp this whole ordeal is a real mindfuck, and I keep repeating in my head what O'Brien tells Winston in 1984: "If you want a vision of the future, imagine a boot stamping on a human face - forever." And I'm not the one who deserves to be pessimistic.

- Who is helping these people?

As I said, I don't know if this blog has a point. I just wanted to share with all of you the simultaneous triumph and degredation of humanity as it's literally just outside my window. 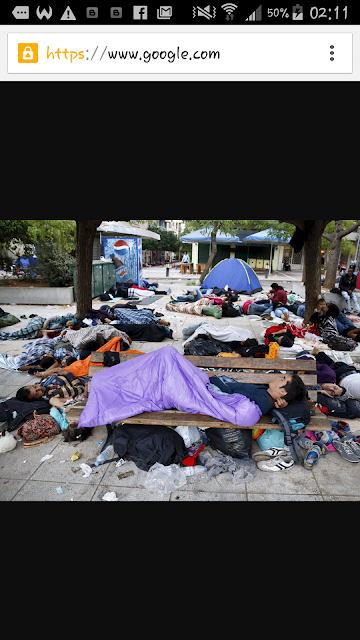 Posted by Hillary at 4:04 PM No comments: