A Mile in His Shoes: Chopines

When they were first developed in Turkey in the 1400’s, chopines were, more likely than not, created as a way to protect the wearer’s feet during inclement weather.  Originally fashioned with a cork bottom roughly seven inches in height, chopines would have kept footwear dry and dresses and cloaks from dragging in the mud or in puddles.  In Turkey, chopines took the form their medieval precursor pattens had and were, for a time, suitable for both sexes.  As the chopines moved across Europe and came into fashion, however, they became almost exclusively a woman’s shoe. 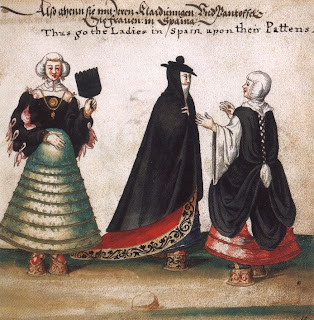 With the emergence of chopines as fashion, we begin to encounter some initial disparities between the ideas of beauty and power and the ideas of subjugation.  It was wealthy Venetian women who popularized the shoe, with its heel of cork or wood and straps of velvet, and skyrocketed its height to up to thirty inches, essentially immobilizing the women who wore them, making them “half flesh, half wood” (John Evelyn, The Book of Costume, 1966). In order to move at all in chopines, women required a servant or two on whom they could lean as they walked.  Even with two servants guiding the wearer of the shoes, walking was a slow and difficult process.
Their popularity soon spread to France, Spain, Switzerland, England, and China, where a version of the chopine would replace foot binding.  Using that fact as a basis, it’s fairly simple to see that chopines acted as a tool to cripple the little power that women may have had.  She could neither walk quickly nor, in many instances, walk alone; the sheer impractically of such high heels sometimes rendered her incapable of leaving her home; but in order to maintain the appearance of nobility or aristocracy, she was encouraged to comply with the restrains on normal activities, such as walking, and the dependency that came with wearing them.  Scholars have speculated that husbands additionally encouraged their wives and daughters to wear them to increase their morality by decreasing likelihood that they would be involved in illicit liaisons, for the plain reason that they could not walk out of the house unassisted.
From all the hype surrounding these often comically high heels two amusing facts emerge:  firstly, although the shoes themselves often came glamorously ordained, the chopine was rarely seen.  Rather the stature it allowed its wearer spoke for itself regarding socioeconomic class; secondly, the second most likely woman to don chopines were prostitutes.  It is evident that the aristocratic women who wore chopines felt the need to tower over the rest of humanity, making their “high births” a literal height divide.  It is ironic to ponder the fact that the women who would publicly match them in stature were whom most people found the dregs of society. 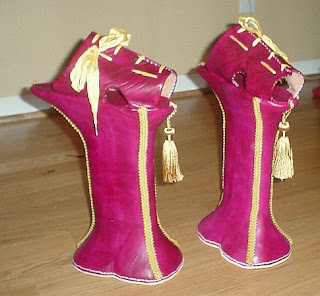 Prostitutes used the chopines as a marketing tool, a way to get more easily noticed in a sea of desirable faces and bodies.  However, since, unlike their chopine contemporaries they couldn’t afford two servants to walk them, the prostitutes rarely left the sanctuary of the brothel’s main door.  It has been reported that working and lower class people made fun of both the aristocracy and the prostitutes for wearing such a ridiculously inappropriate shoe.  If such comments were tinged with practicality or with jealousy we can only venture a guess.
Nevertheless, chopines remained in fashion for nearly two hundred years, until the 1600s.  At this point, women and fashionable shoemakers reasoned that the shoes would be lighter if the heel remained raised, but the sole was lowered, the same design we use today.  This new version was a more pragmatic shoe.  Indeed, women could walk independently, though their steps were shorter than they would be without the heels and balancing on uneven streets, like those made of dirt and cobblestone, was a very difficult task.
At the same time chopines were lowering their souls, the Spanish Inquisition, still in full fling, was pouring itself fully into its witch-hunt.  1609 marked the start of the notorious Basque witch-hunts, in which hundreds of women were accused daily of witchcraft.  The fear of heresy was so rampant in Europe that any form of beguiling, however innocent, could be condemned as witchcraft.  In 1670, the British Parliament put this law into action:
“Be it resolved that all women, of whatever age, rank, profession, or degree; whether virgin maids or widows; that shall after the passing of this Act, impose upon and betray into matrimony any of His Majesty's male subjects, by scents, paints, cosmetics, washes, artificial teeth, false hair, Spanish wool, iron stays, hoops, high-heeled shoes, or bolstered hips, shall incur the penalty of the laws now in force against witchcraft, sorcery, and such like misdemeanors, and that the marriage, upon conviction, shall stand null and void.”  (Marriage Act of 1670, passed by King Charles II)
Due to complaints of many men, who somehow hadn’t realized that their wives, who undoubtedly toddled along in their chopines with assistance from their maidservants, were, in fact, shorter than the husbands had expected, and this law likened height “deception” to witchcraft, an act punishable by death, a more merciful outcome than many of the determining inquiries to “prove” witchery.
In Venice, too, leaders eventually outlawed the chopine, but for a much different reason.  As one might deduce, shoes heightened upwards to thirty inches have to battle the inevitable force:  gravity.  It was not at all uncommon to fall while wearing chopines, but many women continued to teeter in their enormous shoes throughout the duration of pregnancy, causing a hike in the number of miscarriages.  While it is easy to see connections between the incapacitating yet comical heights of these shoes connecting with gender subjugation, the Venetians seemed to have realized that they crossed the proverbial line.  Yes, women were considered second-class to men, less intelligent, more emotional, and incapable of hard labor, but their bodies were absolute necessities in the continuation of life.  This required that men temporarily find other ways to suppress women; the heeled shoes would return later.
Posted by Hillary at 9:58 AM