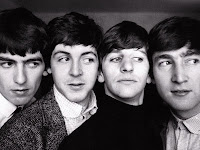 What’s going on?  What isn’t going on is the more appropriate question.  As Bob Dylan said just five years before he plugged in his guitar and caused a notable stir, “The times they are a changin’.”  And they were in constant shift.  Rebellion against the nuclear family and “the man” came to a head, with many different sectors threatening a revolution, which never came.  Hippies and freaks, heads and druggies, Dr. Timothy Leary and the Beatles, the Vietnam War and the Cuban Missile Crisis, Andy Warhol and Marilyn Monroe, Charles Manson and the Sexual Revolution, One the Road and the Beatniks, the Black Panthers, Civil Rights Movements, Dr. Martin Luther King, Jr. and a slew of assassinations, the British Invasion and eastern influence: indeed, many factors contributed to the melting pot of unrest and unrest turned into creation.  Suffice it to say, the 1960s isn’t an easy decade to pin down in a paragraph.  An important thing to keep in mind is that, in the middle of the country, many Americans are still holding onto the ideals and ideologies made so popular in the 1950s, while, on the coasts, a population of people (primarily youth) is beginning to “tune in, turn on, and drop out.”  There was a big philosophical dilemma amongst this subculture, and that was how to maintain a greater good while still receiving personal satisfaction.  They answered this question with communal living, drugs, music, and protests.  The majority of people who weren’t involved in this movement were scared of it.  They found hippie practices immoral and devastating to the previous decade’s “family friendly” atmosphere.  Arguably, the hippies were both, but they were also central to the shift of consciousness in America, when, for the first time since the Industrial Revolution, there were real things to care about; big things that affected millions of people worldwide. The end of the '60s was a tumultuous one, culminating in the Manson murders, the height of the Vietnam protests and the institution of the draft, the Rolling Stone's answer to Woodstock where the Hell's Angels kill several concert-goers, a huge police raid of a gay nightclub in San Francisco, and the break up of the Beatles. 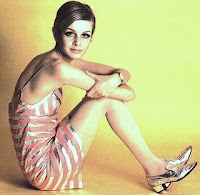 What were they wearing?  Women’s fashion became an enormous industry in the ‘60s.  Although in the previous decade women had been slaves to fashion, there was neither the modeling industry nor the 70 million children of baby boomers coming of age.  The ‘60s learned quickly to cater to this demographic and made excellent (if not highly depraved) work of commodifying identities.  By the time the hippie movement became a “fad” (1967, three or four years after it became a movement), any corner shop sold love beads, tie-dyed shirts, Go-go boots, and miniskirts. And, with the installation of Twiggy, one of the world’s first big-name models, women had quite a few identities to buy into.

Men, too, had fashion icons during this time, most notably those four boys from Liverpool.  Yes, the Beatles, whose “mop top” label served well as a style for society to emulate, were much more than just architects behind a new music scene.  Still, this was initially a conservative look; not a far cry from the suits of the past decades.  As the ‘60s became more and more, well, the ‘60s, men’s fashion had an extreme makeover.  Think Austin Powers, in his velvet purple suit and frilly undershirt, add a five-inch wide psychedelically decorated tie and you’ll have a fairly accurate image of where fashion grew to during the decade.  In between, we had more people following the Beatles’ influence.  When they left their suits for Nehru jackets, people followed suit.  When they grew their hair even longer, people followed suit.  And the worst of the worst in fashion – and this is not the Beatles’ fault – polyester suits that stayed popular into the 1970s.

Additionally popular during this age were the Beatniks, a group Jack Kerouac had form in 1948 and who remained active through the 1950s, though not nearly as popular.  (Can’t imagine why…) Essentially a group of starving artist hipsters, the Beatniks dressed in black with accompanying black berets and mutually lamented in emotional discontent, then wrote about it.  Similarly starving artists (read: youth who felt disenfranchised but not motivated to join the hippies) began to copy this style, with the apparent hope that dressing like a Beat would encourage artistic development and/or get them a publishing deal. 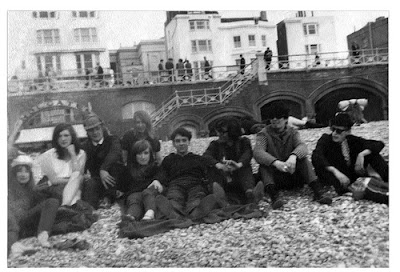 What were they wearing on their feet?  Women had a variety of shoes to choose from.  The population that stayed away from the movements of the ‘60s kept their feet in stilettos, but others migrated to significantly lower, clunkier heels and Go-go boots and other platform shoes.  For men, the Beatles had in influence even in their footwear.  The “Beatles Boot,” also known as Chelsea or ankle boots, boasted most popularly a pointed toe (though version came with a rounded toe) and a small, Cuban heel.  These shoes were popular with men throughout the decade.  The more conservative man still had his Oxfords and loafers to fall back on, but they missed out on the Crayola box of colors and new materials (like suede!) that shoes were coming in.  The ‘60s made up for decades upon decades of stagnant men’s fashion.

Hippies had a whole different scene going on on their feet.  The shift towards natural life meant that hippies wore moccasins, sandals, or often no shoes at all.  (We’ll see this barefoot movement come back into style at the turn of the century.)  For the hippies, their general style of no shirts, no shoes, and no service, coincided perfectly with the undefined freedom for which they were searching.

What’s going on? After the tumultuous end to the ‘60s in which revolutions imploded yet most everybody was still generally disillusioned, the game changed a slightly.  The ‘60s had left some significant marks, including some tangible ones, like civil rights and women’s liberation.  (I know what you’re thinking:  wasn’t there already a women’s liberation?  Yes, in the 1910s and 1920s, but then the 1950s happened.)  Due to these new societal advancements, there were elements of both extreme tension and free expression rampant in society.  The once-disenfranchised masses now wanted to rub in the faces of the people who had stifled that same freedom – namely white males.  Of course, there is such a thing as too much freedom in America, particularly for women, and, despite the pretext of freedom, white males still held the majority of the power.  So they pushed Valium and other mood stabilizers. Valium, the best selling pharmaceutical from 1969 – 1982 offered to help stave off housewives’ boredom as well as help working women balance their busy schedules; in reality, it put women back in their presumed place. 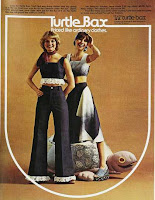 What were they wearing?  One of the more notable expressions was the turn to fashion androgyny.  Many of the fashions from the ‘60s carried over, including the ever-flattering muumuu, and everybody wore them without too much regard for gender rules.  A good word to classify fashion from this decade is “chaotic.”  Women could wear a miniskirt one day and a granny dress the next; and, for that matter, so could men!  Other options included bell-bottoms, halter-tops, painter’s pants, hot pants, and hip huggers.  Of course, no woman was complete with her Ferra Fawcett feathered hair-do!

Once again, men had a golden decade in fashion.   Well, erm, that is to say they certainly weren’t constrained.  Rule of thumb:  if it was loud and kind of painful to look at, men wore it.  Their fashions were generally rollovers from the sixties – like the polyester suit and wide ties – but the 1970s put these already garish fashions on steroids, introducing clashing patterns and unnecessarily bright colors.  Needless to say the fashion police were on sabbatical during this decade. 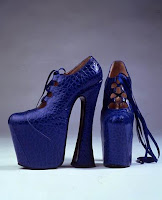 What were they wearing on their feet?  If you weren’t wearing sneakers or anti-establishment shoes, you were wearing PLATFORMS!  The age of disco and its complementary big shoes encouraged all disco lovers – which was essentially everyone except rockers and conspiracy theorists from the ‘60s – to sport this gaudy footwear and to shake their groove things, shake their groove things, yeah, yeah.
Posted by Hillary at 12:44 PM