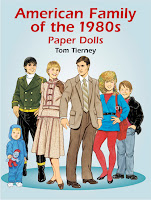 What’s going on?  The great marker of the 80s is consumerism.  Ronald Reagan followed by Richard Nixon ran the White House and Capitalism tasted good.  Greed tasted good.  Privatization tasted good.  Gone were the corner stores!  They couldn’t hold a candle to these new-fangled malls that sprung up everywhere.  The baby boomers are 40 years young, and are happy to spend their cash to buy the American dream:  stuff.  As a rebellion, their children go punk rock or join a hair band.  It’s a tripped out world, because most people could afford it.  Hell, even women now could earn a living.  After their place in society has been tossed around haphazardly for the last eighty years, women are finally welcomed into the work force – and I feel I should make this clear – while men are working in it as well; not just because of a labor shortage.  Granted, these workingwomen are competing in a man’s world and are generally being undercompensated for the work they’re doing, but hey, equality apparently takes time.
Other milestones of the 80s included the fall of the Berlin Wall (1989); the assassinations of John Lennon (1980) and Ronald Reagan (1981) and the assassination attempts of Margaret Thatcher (1984) and Pope John Paul II (1981); the first personal computer, the boombox, the walkman, MTV, Pacman, Nintendo, and the VHS tape; the beginning of the AIDS pandemic; the Chernobyl nuclear crisis (1986); an all of a sudden everybody hated smoking, a pastime that had been absolutely loved for decades.  I blame it on the mullet.
What were they wearing?  What you chose to wear in the ‘80s depended on a lot of factors, including, but not limited to: gender, race, class, age, and association.  For instance, if you were a woman in the work force, you might choose to masculinize your appearance by wearing a muted, tailored suit.  If you were an emerging African-American hip-hop artist, you might choose more vibrant neon colors and baggy pants.  If you were a punk rocker, you might shop at Hot Topic (founded 1988) to fight the establishment.  Like during the ‘60s, people had the option to buy an identity, and while they may not have had any of the ideologies or personal qualities to back it up, they could sure dress the part.
In the ‘80s we see celebrities who continue to serve as icons of pop culture.  Madonna, Michael Jackson, and Prince in the pop scene; Bon Jovi, R.E.M, and Metallica in the rock scene; Courtney Love, Sid Vicious, and The Clash led the punk scene; the Beastie Boys, Run D.M.C., LL Cool J, and Grandmaster Flash ushered the hip-hop scene into mainstream culture.  Depending on what you identified with, you could easily go out and buy any one of these identities at the nearest mall.  In fact, for younger people, it was fairly standard to find your niche, dress like it, and call it individuality. 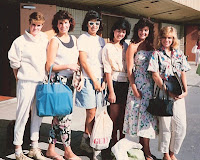 For workingwomen, going out and dressing like Madonna would not have added any legitimacy to their cause.  Instead, workingwomen decided to bulk up to appear more masculine – and I don’t mean they started taking steroids and pumping iron.  Oh, no.  Bulking up for women in the ‘80s meant shoulder pads and hairspray.  Bulky shoulders and big hair added stature to a woman’s otherwise, well, womanly physique.  No leg warmers or stirrup pants for these corporate broads:  power suits all the way!
Men’s fashion, on the other hand, took an enormous step backwards.  As if the ‘60s and ‘70s never happened, men were right back into square suits and thin ties.  They managed to add a bit of necessary spice in their bold-printed shirts, though.  We can all be boring all the time. 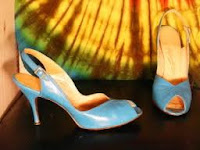 What were they wearing on their feet?  Shoe factories boomed in the ‘80s, which meant a rise in shoe sales, particularly among women.  Additionally, this meant a rise in designers, and whom you wore in the ‘80s became equally if not more important than what you wore.  As aforementioned, buying into an identity was of great importance, and the identity couldn’t be completed without the proper footwear.  ‘80s youth had a veritable feast of choices from sneakers to neon heels and everything in-between.  Power suit-donning donning women had the option to take the more masculine approach – loafers or mannish Oxford pumps – or to claim back a small bit of femininity and wear a sling back spike heel.  All men had to do was dig in their closets and dig out the old reliables:  loafers, Oxfords, brogues, all in black or brown, of course.
•1990s
What’s going on?  It is during this decade that America, having apparently exhausted all its other options, declares wars on nouns, most notoriously the war on drugs and the war on terror.  This decade oozed with violence and unpleasantness, including the quincentenary of Columbus’ “discovery” of America.  While many red-blooded Americans acted like this anniversary was the 4th of July on steroids, others protested it as violent and racist, furthering offering the ever-evolving political divide.
We’ve also got some notable suicides, deaths, and murders to mention.  Biggest doozy:  the Rwandan genocide (1994); between 500,000 – 800,000 Tutsi and Tutsi supporters were killed by the hands radical Hutus who were tired of not having power.  Second biggest doozy:  the Columbine High School Massacre (1999); two troubled youth shoot twelve of their peers before killing themselves, making it the biggest high school shooting in history and influencing many other schools to institute lockdown drills. Honorable mention doozy:  Dr. Jack Kevorkian is charged with multiple homicides for practicing euthanasia. And now for the celebrity category.  Biggest Doozy: Nicole Brown Simpson and Ronald Goldman were allegedly murdered by – oh, wait, excuse me – allegedly not murdered by O.J. Simpson (1995).  Second biggest doozy:  Princess Diana and her lover, Dodi Fayed die in a car crash in Paris (1997). Honorable mention doozy:  John F. Kennedy, Jr., his wife, Carolyn, and his sister-in-law, Lauren Bessette, continue the Kennedy curse when their plane crashes off Martha’s Vineyard (1999).  And last but not least, doozies for political change.  Biggest doozy:  21-year old Matthew Shepard is beaten to death for his sexual orientation, sparking national concern for the welfare of LBGT citizens while simultaneously adding fire to a heating debate on the legitimacy and morality of homosexuality in the United States (1998).  Second biggest doozy:  Kurt Cobain, front man for the grunge rock group, Nirvana, takes his own life (1994).  Copycat suicides ensue, and officials worry that Generation X might be a little too into their music.  But Generation X doesn’t hear because they’ve got their headphones on.  Honorable mention:  Freddie Mercury, lead singer of the Queen, dies of AIDS (1991).  His death is one of many that increase support for people with AIDS.
Additionally, music has taken a strange and wonderful turn.  There are suddenly myriad sounds available.  The ‘90s saw the birth of the boy band as well as Britney Spears (before she went off the deep end), Weird Al Yankovich, Alanis Morisette, Marilyn Manson, and grunge rock, while it continued to support the sounds of the ‘80s.
Plus, there are a lot of channels on TV.  So if you can’t find anything else to do during the ‘90s, just curl up on your couch, eat some Doritos, and drink Pepsie endorsed by the Spice Girls.
What were they wearing?  Thanks to Kurt Cobain, the kids of the ‘90s were grungilicious; torn overalls, greasy long hair, and rocker tees.  That, or they were like Alicia Silverstone in Clueless: micro minis, uncomfortably long socks, baby doll dresses, and belly shirts.  It’s no wonder that such a staunch dichotomy appeared in fashion, given the state of the nation.  Either you were happy – or, more probably, clueless – or you were disillusioned with life in general and took it out on your clothes.
Women of the ‘90s took their fashions from the ‘80s and shrunk them.  The smaller the better.  Mid-drift revealing shirts coupled with short acid wash jeans was an absolutely acceptable look, although not for the office.  But, unfortunately, moreso than in any other decade, summarizing ‘90s fashion is a sweeping generalization. The fact is that, from the ‘80s onward, people had a lot of choice in what they were wearing and, as much as fashion was about buying into an identity, it was also about self-expression.
The same rule applies for men, but I can happily note that they are no longer refined to their conservative styles.  They’ve got flannel, they’ve got jerseys, they got cargo pants, and they’ve got bomber jackets.
What were they wearing on their feet?  It’s impossible to pin down exactly what everybody was wearing because style was so diverse.  However, some of the more popular choices included the scene included the Air Jordans, Jellies, skate shoes, platforms, and Hush Puppies.
Posted by Hillary at 12:53 PM